And thanks for reading!  This is week 10 in the series relating to the psychology of the business, particularly as it relates to auditions and booking work; This is supposed to be FUN!.

Why do you act?

We spent the last 9-ish weeks (I can’t remember if I skipped a week or not, and I am far too lazy at 6AM on a Monday morning to go figure it out) talking about the psychology of auditioning and booking work.   And yeah, I write this first thing Monday, review/edit/publish first thing Tuesday and it gets emailed to subscribers first thing Wednesday…so if you are reading this Wednesday wondering why I am talking about being lazy on Monday…that’s why.  Anyway, and I have alluded to this previously, in order to survive this profession you have to ask yourself WHY you do it…and if the answer is anything but “It’s fun!” then you are going to struggle.

It isn’t (and nothing really CAN be) all fun all the time, but if having fun with acting doesn’t outweigh the not-so-fun parts, then perhaps you should be concentrating elsewhere.  I don’t mean to discourage anyone from pursuing a career in acting, instead I am suggesting perhaps you should take a step back and look at this career from a different perspective.

I recognize that acting is a job, and as a job we would like to be able to earn enough money to support ourselves.  I get it…not consistently booking work can be frustrating.  The thing is, it’s a job unlike any other job on the planet. It’s a bit like being in professional sports:  In sports you get paid to play a game.  In acting, you get paid to play a role (or play a part or play a character)! It’s a job, but it is also PLAYING. 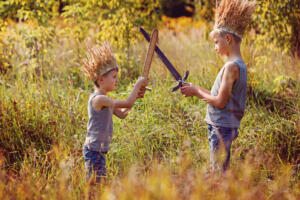 Maybe you didn’t do this, but when I was a kid, we used to play “Cops & Robbers”.  Do you remember doing that?  It was fun, right?  You pretended to be either a cop or a robber and you acted out bank robbing scenes and getting arrested or (trigger warning!) shot by (or shooting) the cops.  When we got too old to run around the yard pretending to shoot each other with our fingers, we played games like Dungeons & Dragons where we pretended to become wandering fighters, or magicians, or healers.

You put on short plays or skits for your family…little talent shows in the living room.  Perhaps you used your mom’s hairbrush to belt out tunes along with your AM transistor radio (for you young folks, radio is what you listened to before Pandora and Spotify, and AM was a type of radio before FM and Satellite – yeah, I’m old).  Sometimes you used action figures to act out scenes between superheroes and villains.  I’m sure you can think of more examples, but this is enough to illustrate my point.  Acting was (IS) fun.

In all of these examples…

There was no pressure… 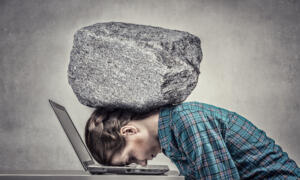 When we acted as kids in these ways, there were no mortgage payments, light bills, car repairs, medical bills, kids of our won who wanted food or spouses asking us when we were going to contribute financially to the family.  There was no pressure, you could just have fun and act.  You could bring your authentic self to a performance and not worry about whether some distand casting director or producer was going to find your performance compelling and agree to pay you for it.

Here’s the rub:  even without all the training and coaching, you were a good actor then!  Yeah, it’s hard to believe, but it’s true.  Some of the reason for that is most of it was unscripted, so you weren’t trying hard to give someone what they wanted but were just “in the moment” listening and reacting to your “scene partners”.  You weren’t worried about getting booked or paying bills.

So, what really IS acting, then?

According to Sanford Meisner, acting is “Behaving truthfully under imaginary circumstances”.  Consider all of the above examples and feel free to correct me when I say that in each and every one of them what we were doing was “behaving truthfully under imaginary circumstances”.  Sure, YOU made up the circumstances, not some distant unknown writer, and there were no (or very few at least) expectations on how you might respond to the circumstances…but what you were doing was acting, and probably acting quite well…and having fun on top of it!

Based on what I’ve written above, I conclude (way before the conclusion of this post) that acting is fun, it’s all the other crap surrounding it that detracts from having a good time.  I further conclude that dispensing with all the other crap (as it relates to acting) will mean you’ll start having fun again!

I understand you can’t just “dispense” with all the bills and responsibilities of being an adult.  It’s unlikely your mortgage holder, utility company, grocer, or the gas station (or your spouse and kids!) will just let you slide so you can enjoy acting again.  Those pressures are not going to magically go away until AFTER you win an Oscar.  So, what can you do to make sure you can have fun as an actor? I’m glad you asked!

It is imperative that you have a survival job, or a partner who earns enough and is willing to let you just pursue your passion career, to relieve some of the pressure.  I get that the survival job itself may come with pressure (such as not having enough time to pursue your career), but if you can land a job that is flexible enough for you to audition and work when you book…then even that pressure is relieved. 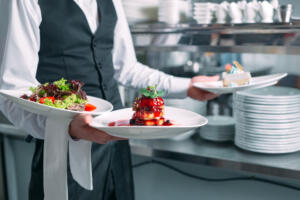 How many actors do you know (or you’ve heard of) that work as wait staff in restaurants?  Why is that?  It’s the kind of job you can work primarily during evenings and weekends, leaving weekdays free to pursue acting.  If you are a good waitperson, you can make a decent living AND, if you need to, you can resign if you book a long-standing gig and are likely to find another waiting job when it’s done.  Same can be said for Uber, Lyft, Door Dash and other service type jobs…flexible income is the key.

A dependable source of income

Having a dependable, flexible, source of income outside of acting is probably the biggest deterrent to not having fun as an actor.  You may not be able to live like a king/queen, but being able to pay your bills and stay fed will help you lose the desperation to book a gig that is (IMHO) the reason you are not having fun acting anymore.

The next biggest thing keeping you from having fun is people in your life who are not supportive and encouraging.  If someone is constantly asking you when you’re going to realize you’re not going to make it and suggesting you “get a real job” it’s time to re-evaluate that relationship, not your career choice!  I know you can’t walk away from every person who is negative, but you can certainly thin the herd!

Remember there is no “right” or “wrong” way to play a character/scene. The pages of the script are black and white, and some choices are made for you by the writer…but everything in that white space is created by YOU. YOU figure out who the character is and WHY they do the things they do.  What motivates them, how they are feeling and how they feel about both the circumstances and the other characters in the scene.  So, relax and remember that you are “playing” a character and that you can’t get it wrong…you can only present your version of the story and then see if the production team thinks it fits with their vision.

If you can do that; remove all the external pressures and then remember that it is IMPOSSIBLE to be wrong…you can have fun again.  And after all…You’re not getting the f*&^ing job anyway, so you may as well have a good time!

When we’ll wrap up the series with: “And still…You’re not getting the f*&^ing job!”.

If you haven’t already, please feel free to subscribe so you don’t miss anything – and as a thank you receive a free copy of my E-Book: Everything You Ever Wanted to Know About getting Started in Voice Over but Didn’t Know Who to Ask!