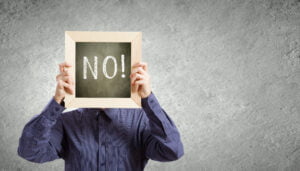 And thanks for reading!  This week I am going to begin a series of blogs that relate, mostly, to the psychology of the business, particularly as it relates to auditions and booking work.  I am entitling the series: “You’re not getting the f*&^ing job!” thanks to my friend and actor Michael Kostroff who teaches a video series titled “Audition Psych 101”. If you are working as an actor, I highly recommend this course. I am paraphrasing and plagiarizing his material with his permission in this upcoming series, so if any of this resonates with you, head on over and sign up for his course.

For this series, in order to keep from having to type out “Voice actors, stage actors and screen actors” I will refer to them all as “actors”.  Note that the word actors appears in each one, so it fits. I intend for this series to relate to all of them equally, however, when that is not true, I will be sure to point out the differences.

Now to immediately contradict myself, this week we will be focusing primarily on stage and screen actors so if you are ONLY concerned with all things voice over, then you can stop reading now.  The reason for this is that I pretty fully covered getting started in voice over in a series of earlier posts.  If you are interested begin reading that series HERE.  I suggest you keep reading though, since there is considerable overlap between the three and you MAY find something useful.

But before we dig in too much…

Let’s begin by looking at acting in general, and what an actor’s job may look like.  I suspect it is not what you think it is.

So, you want to be an actor! 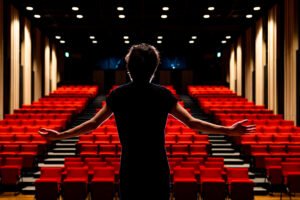 We watch movies and TV shows, and we see the awards and accolades famous actors get.  We think we would LOVE to live that glamorous Hollywood lifestyle.  You think to yourself: I could do that!  And the simple truth is, you COULD.  But the reality is: You probably WON’T.  Not to be discouraging, but, becoming a well-known famous actor is about as probable as becoming an Olympic athlete, or a Super Bowl winning quarterback, or winning the Power Ball Lottery.  It’s possible, but not probable.

Don’t let that last sentence discourage you.  Just setting reasonable expectations.  For every famous actor you know, there are THOUSANDS…no TENS OF THOUSANDS…no HUNDREDS…well, never mind, there are a LOT of working “unknown” actors who make a good living as actors.  This category, working actor, is the most likely outcome of an acting career.  And that’s not a bad outcome really if you love acting.

But why is it so hard?

Simply put: An acting career is hard.  It’s not just hard work (it is though) but it is also hard psychologically.  Actors live with constant criticism and rejection.  The criticism part is real, so you have to have thick skin, and we will talk a lot more about the rejection…maybe even an entire blog post about it.

It is more than…

Acting is a lot more than memorizing lines, dressing up in costume and showing up on set.  It IS all those things, but it is a lot more than that.  Beyond developing your character, deciding how they relate to the other characters and what their life was before entering the scene it is also a business.  You are the entire corporation (at least to start out…eventually you can hire an agent, manager, publicist etc…) AND you are the product. Actual acting is probably the smallest part of your business…marketing yourself, maintaining relationships and finding the work (submitting and auditioning) is the lions share.

On top of THAT… 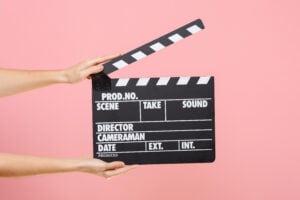 For screen actors, the days are long and can be tedious.  Early call times and late wrap times are common. 12, 15, 18+ hour days are the norm…all just to film maybe two scenes of the project.  Stage actors experience long days as well, leading up to the opening.  Weeks and weeks of rehearsals and run throughs before opening night, then a long run of performing the same piece over and over. What you see on screen or on the stage is just the tip of the iceberg!

I’m a process-oriented kind of guy.  As long as I can lay things out in small easily manageable steps, I can pretty much deal with anything.  So, just to have a peak behind the Oscars and Academy awards to see how they got there, let’s take a look at the process for a working actor.

You may think that roles actually find you.  In some cases, that’s true for the A-List marquee actors, but for anyone else waiting for a role to find you will have you living on the streets and eating out of dumpsters.  You have to find the roles.  If you have an agent and manager, they are also looking for roles that you would be a good fit for and that helps, but primarily you have to find them yourself. You can do that with online marketplaces, and you can find them by researching upcoming productions and pitching yourself to the production team.  Either way, you have to find them, they won’t find you.

Once you find an appropriate role, you submit for it or pitch yourself.  This is where you send your head shots, resume and demo reels to production in hopes that they feel you are a good fit as well. MOST of the time, you hear nothing in response to your submission.

In the event production thinks you may be a good fit; they’ll ask you to audition.  Some want you to come to their office and audition in person, but these days the most likely scenario is a self-tape audition.  For this you need a setup to film yourself (and I will talk about what that looks like in another blog) performing a scene they choose from the project.  MOST of the time, you hear nothing in response to your audition.

If they like what you did in your audition, they may “call you back” for a second audition to see if you have chemistry with your scene partner or to give you some notes to make changes to the way you played it for the audition.  MOST of the time, you hear nothing in response to call backs. (I’m sensing a trend here).

If you SHOULD hear back from the submission, audition, AND call back…you’ve probably booked the job.  Probably…but not always.  Sometimes production teams are kind enough to get back with you to let you know they liked your work but decided to go in a different direction.  Sometimes.  Not very often.

OK, so you made it through all the wickets and booked the job!  YEA! Now the work starts! But wait…all that other stuff was a lot of work too!  Yes, yes, it was.  But you are just getting started.  Now you need to fully develop your character, memorize your lines, (in this age of COVID) get COVID tested, head to wardrobe for fittings and costume and ultimately show up on set on the right day and at the correct time.  Your day will consist of wardrobe (getting into costume), hair and makeup, a blocking rehearsal (or 3 or 4) and then…an hour or two waiting till they get lights and cameras positioned and ready for you. 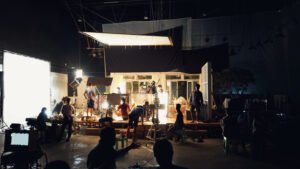 You’ll film your scene, then wait for repositioning and film the scene again…this will repeat until the director and director of photography have all the angles and closeups they need to take into postproduction.  Typically, this means filming the same scene 6-8 (or more) times, with the 1-2 hour wait in between for repositioning the camera and checking the lighting.  You may film 2-3 scenes in a day, so you can see how this can make for very long days.  On the plus side there is craft services for snacking while you are waiting.

Did this scare you off?

I hope not.  Acting is a fun and rewarding profession.  You get to meet a lot of really great creative people and collaborate to make awesome content!  But, it’s not all glitz and glamour; a lot of hard work goes into these projects AND a lot of hard work goes into finding and getting cast in them.  If you consider the numbers alone between submissions, auditions and call backs you can understand why: You’re not getting the f*&^ing job!

When we’ll discuss WHY you want to be an actor!