With this week’s topic “Know at Least One Good Joke”. 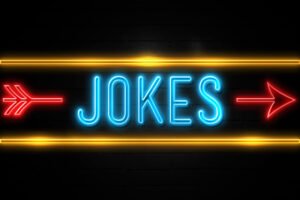 Look around, there are a million comedians out there all working hard to make us laugh.  I like a good stand-up comedy routine so much I actually took a class to learn how to do it.  If you have 5 minutes and are so inclined, my five-minute graduation set is below.

Sorry about the sound quality, this was recorded by a friend in the audience on his cell phone and in a not very recording friendly space.  Still, you can hear most of it.

Aside from the idea of getting up in front of a room full of people and having all eyes on you, even preparing for a stand-up set is not easy.  First, you must prepare an ORIGINAL set of jokes that (hopefully) make people laugh.  It amazes me that comedians can put together and hour long set that is both original and funny.

Anatomy of a joke

If you are interested in learning more about stand-up comedy, reach out and I can help you find resources.  The (very) abbreviated anatomy of a joke is this:

Think about every joke you’ve ever heard, and you’ll find this structure in there somewhere.  There is quite a bit more to it, but broadly speaking every joke contains these elements.  Again, this post is NOT about becoming a stand-up comic so if you’d like to learn more reach out and I will help if I can.

What really is humor?

The short answer is humor is what makes us laugh (duh, right?).  But humor is totally subjective.  A joke may be well received in one situation, but not in another. I guess, based on that last sentence, this blog post should more appropriately be titled “Know at Least One Good Joke for Every Situation”.  Humor can be used as a weapon to alienate people as well as means to bring people together. Sarcasm, in particular, can have a corrosive effect.  I’m going to go out on a limb and confess that sarcasm is my “go to” form of humor and I need to work on that.

Humor, and the study or contemplation of it, have been around for millennia.  According to Peter McGraw and Joel Warner in their book, The Humor Code: A global search for what makes things funny;

“Plato and Aristotle contemplated the meaning of comedy while laying the foundations of Western philosophy… Charles Darwin looked for the seeds of laughter in the joyful cries of tickled chimpanzees. Sigmund Freud sought the underlying motivations behind jokes in the nooks and crannies of our unconscious.” 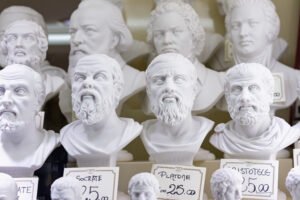 Researchers have found that there are four basic styles of humor.

Why is it good to laugh?

Research shows that laughter is strong medicine. Laughter draws people together and triggers healthy physical and emotional changes in your body. It strengthens your immune system, boosts your mood, diminishes pain, and reduces stress.  It’s true, laughter really IS the best medicine.

Humor in the workplace

The Journal of Managerial Psychology found that, in the workplace, there are 10 benefits to humor:

It sure beats fighting

Scott Weems, a cognitive neuroscientist and author says: “My first thought when I think about humor is it’s a great way for us to have evolved so we don’t have to hit each other with sticks”. Humor can definitely be used as a way to deflect precarious situations.  Although it didn’t work for John McClane!  Yippee Kai Yay! But those movies, and their popularity, sure show how humor can reduce  stress in an audience.

On top of that

At least for guys, humor helps attract partners.  Not suggesting women are not funny, and also not saying that men reject female comedians, far from it.  But research in 1996 by Robert R. Provine, professor of psychology at the University of Maryland, shows that women most often sought a mate who could make them laugh while men most often desired women who appreciated their humor and laughed at their jokes. If you ever look at a couple and wonder “How did he manage to attract her?” my guess is he makes her laugh.  Well, either that or it’s possible he’s filthy rich…but that’s another topic altogether and I’m sure I could find studies about it, but I don’t want to. 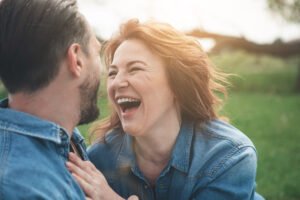 Humor as we age

Did you know that as we get older, we tend to laugh less often?  Yeah, I didn’t know that either.  According to a 2019 Gallup poll, the average 4-year-old laughs up to 300 times a day while the average 40-year-old only laughs about three times per day.  It’s a sad state of affairs if you ask me, but my suspicion is that the stresses of life as an adult has a lot to do with it.  Not many four-year-olds have a job they hate that they need to pay for a mortgage and food and all the other things we adults are responsible for.  Looking at the news these days, it’s no wonder us older folks tend to laugh less.

One of my favorite things when watching a movie, especially an action movie or thriller, is when the producers include a series of outtakes or bloopers during or after the credits.  For me, the more stressful the story the funnier the bloopers.  It’s fun to see the cast and crew actually enjoying themselves on set.  I’ve been on sets where people were very serious about their work and no amount of cutting up or joking was allowed.  I still have fun on set, but the ones where a bit of levity is permitted are SO MUCH more fun to be on.

You DO have to be careful though

So, another confession.  I’m a bit of a cut up myself, and in high school I was definitely the “class clown”.  I love to, and am told I’m pretty good at, finding the humor in otherwise very serious situations.  No, I’m not THAT guy at a funeral…give me SOME credit!  I do like to make funny comments about situations though and I have to really watch my tongue sometimes.  Film making is a serious, and expensive, business.  While cracking a joke on set can certainly lighten a mood, it also slows down production and that can be frowned upon.  Especially if you are one of the “junior” performers on set.  So, unless you’re Jack Nicholson or someone else at his level, be careful making jokes on set while you’re working!

But as we can see

Humor is definitely a good component to any situation if used wisely, sparingly and with care.  Never use humor to belittle someone or make them feel unworthy or stupid, don’t be the person who is constantly cutting up and be mindful that your jokes COULD be costing production money.  But humor should be a tool in your toolbox, so everyone should Know at Least One Good Joke!