With this week’s topic “It’s never too late for an apology”.

When should you apologize?

The truth is, as tough as it can be to apologize to someone, sooner is better than later.  Honestly, even if it is already later, apologize before it gets later still.  If you owe someone an apology, NOW is the time (whenever NOW is).  Frankly, it’s never too late!

Why is it important to apologize?

There are many reasons why apologizing when you’ve hurt someone or even just broken a rule of social conduct is good both for the person you’ve “wronged” and yourself.  Psychologists have studied the benefits and have come up with several reasons:

Apologizing lets the injured party know that you both know what the “rules” are and that you agree they should be followed.  It restores trust and helps them feel safe when they know you agree that hurtful behavior is not OK.

A sincere apology restores dignity to the person you’ve hurt.  It lets them know that you are aware that whatever you have done was your fault and not theirs.  It helps them to feel better and it helps them “save face”.

Apologizing is not weak!

If I had to guess I would guess that almost everyone who is reading this has had, or knows someone who has had, a relationship completely destroyed over some argument or another, and because neither person wanted to “break down” and apologize that relationship stays damaged for a very long time.  Why is it that we feel we need to “break down” and apologize, as though life were some sort of game to be won or lost?  It seems we humans feel that apologizing is a sign of weakness, but in fact a sincere apology is a sign of strength!

I think this is where it gets difficult and what keeps many of us from apologizing (sincerely) when we need to.  Let’s face it, none of us are perfect and in any disagreement, there is probably plenty of blame to go around on both (or more) sides.  THIS is where our pride gets involved.  It is difficult to look objectively at our own behavior and recognize where we are at fault.  Humility is key here.

I’ve used the term “sincere apology” several times here and for a good reason.  A genuine apology is sincere!  But what IS a sincere apology? Glad you asked!

It is NOT easy

The next tough thing is actually facing the person you’ve hurt.  Ever had to speak to someone who is mad at you for something you’ve done?  It’s tough sometimes to even get them to listen to you at all!  And then admitting out loud to them that you’ve made a mistake, showing remorse and humbly asking for forgiveness can leave some people paralyzed with fear.  If you can get to the last step, telling them how you’ll fix it…it starts to get easier.

A sincere apology might go something like this (fictional names of course):  Bob, I need to apologize for (this thing I did or said), I should never have done that, and I feel terrible that my actions have hurt you.  I would like to humbly ask your forgiveness for that, and I will make sure it never happens again by (how you’ll fix it).

Think about someone your upset with.  If they came to you like this and asked forgiveness, how hard would it be to stay mad?  It is almost impossible to stay mad at someone who humbles themselves to you, admits their wrongdoing and asks for forgiveness.  One major benefit of offering a sincere apology is people don’t stay mad at you.

It’s not a miracle cure

No matter how sincere (or timely) you deliver an apology, don’t expect things to just return to normal right away.  Remember that your apology does not undo what was done.  It will not instantly reverse the hurt or embarrassment your actions have caused.  What it WILL do is start the healing process.  It provides hope and a path to rebuilding a relationship.

This story may bring the idea home.  I had a disagreement with one of my children.  That’s not uncommon, but we are both pretty stubborn and strong willed and without naming names or going into details it caused us to become estranged.  It was terrible and I wanted nothing more than to heal that relationship…nothing more EXCEPT admitting I was wrong.  We did not communicate, at all, for THIRTEEN YEARS.  Yes, you read that right…thirteen years. 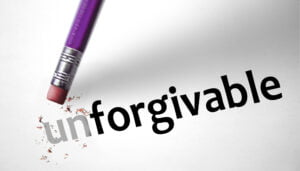 Again, no details but we found ourselves coming together in the same place over a tragedy.  It was uncomfortable and awkward, but we managed to have a short time alone and, after 13 years, I apologized (and I am not ashamed to admit I cried).  After all that time he forgave me and apologized for his role in the rift. Today, 5-ish years later we speak often and once again have a good relationship.  My pride (and stubbornness) took 13 years of my child away.  This is not something I’d wish on anyone.

It was NOT too late…

Thirteen years is a long time to be mad at someone.  It is a very long time to owe someone an apology and not give it. BUT…it was not TOO long.  It was not too late.  It’s never too late.

What does this have to do with VO and acting?

While the majority of this blog has been discussing personal relationships and the importance of apologizing, it is JUST as important in our line of work.  What is the entertainment industry based on?  Relationships!   Every interaction with a client or fellow performer is an opportunity to build relationships.  If we can remember that what we do is NOT focused on getting jobs or making bank, but in helping people bring their projects to life then we can focus on relationship and what we can do for them.

Everyone can think of some celebrity that has acted poorly and needs to apologize.  Most of us can point at someone in the industry whose career has come crashing down prematurely for lack of a sincere apology.  The thing is, in this industry, your success is based as much on your reputation and relationships as it is on your talent.  In most cases a producer/director would rather work with talent that is easy to work with and has a good reputation with minimal talent than an extremely talented person who is difficult to work with and can’t own up to their bad behavior.

But we ALSO know of…

Some entertainers who have acted badly, fallen from grace but then sincerely apologized and changed their behavior…and their careers take off like crazy.  I won’t name any, but I can think of a half dozen off the top of my head.  My guess is Google will find 1,280,000,000 results for “celebrities whose careers came back after an apology”.   This search result alone should convince you!

It’s never too late for an apology

It’s said that it’s important to apologize promptly, and I would agree with that.  What I may feel differently about is the definition of promptness when it comes to an apology.  The truth is the time to apologize is NOW.  That’s prompt.  It doesn’t matter how much time has passed since whatever it is you’ve done required an apology, because, It’s never too late for an apology!