Several new subscribers have joined us again this week and I want to thank you for subscribing and welcome you!  Thanks for joining!

With this week’s topic “Be cool to younger kids”.

Everyone was the “younger kid” at one point.

No one was born an adult.  At one point in your life, you were that goofy young kid who couldn’t WAIT to grow up. Of course, what you didn’t know was: it’s a trap!…adulthood is a LOT more stressful than being a kid…but I digress.

Many, if not most (if not ALL), of us had someone growing up who we looked up to and who was “cool” with us.  Someone who didn’t treat us like a snot nosed kid who was just a pain to be around.  For me, that was my Uncle Jim (no, not a crazy uncle, although I had at least one of those too).

Uncle Jim was my mom’s youngest brother, and he was just 10 years older than me.  For a period in my childhood my grandmother and Uncle Jim lived with us.  My grandfather had passed away and she was struggling to make ends meet.  It was the 1960’s after all and women were not heavily in the work force, my grandmother, in her 60’s, had a rough time finding employment late in life.  Consequently, they moved in with us.

Uncle Jim was a teenager when they lived with us, and I was just a kid (6 or 7 years old) so you’d think he would have been all “Go away, kid, ya bother me”…but he wasn’t.  He took me under his wing.  I remember him teaching me to throw a football and ice skate and catch a baseball.  Believe it or not he would take me with him on dates to the beach and sometimes just he and I would go to the local amusement park Geauga Lake.

And I was no prize as a kid

It’s not like I was the best kid to have around.  I remember always wanting to wear his clothes (which aggravated him I suppose) and when he shipped a box back home from the army when he was getting out (he was drafted during Viet Nam) I tore it open and “stole” the clothes. I wore them every day for the 3 months till he got back, ruining several pairs of pants.  Then I learned once that you could stick a pin through a box and play an album (way back when vinyl was a thing) by resting the pin in the groove and turning on the turn table. Of course, that only worked once as the pin carved vinyl out of the groove.  I ruined more than one album that way.

He was a mentor

He’d get angry with me, for sure, but never in a mean or demeaning way.  Instead, he mentored me, and took the time to explain why whatever I did was wrong and how to act.  He was my mentor growing up.  He was “cool” to me.  He treated me like a human and helped me to grow and mature.

Even as an adult

He was ALWAYS cool with me, even as an adult.  Of course, we developed a much different relationship as I got older, a more mature adult relationship.  But he never stopped mentoring me or being a “big brother” to me.

Sadly, Uncle Jim passed away from pancreatic cancer, likely due to exposure to Agent Orange during his time in the army, more than 20 years ago.  He was just 50 years old.  But he is still there for me.  To this day, at the ripe old age of 61 years, I look up to him and think about some of the lessons he taught me.  It’s safe to say that, even though he is gone, he still influences my life.

Even as he was dying

My last memory of Uncle Jim was on a trip to Myrtle Beach, his favorite vacation spot.  He was pretty far along in the disease and had a hard time getting around and doing things.  Cancer is a HORRIBLE disease, and it took so MUCH from him. As I and my family (by this time I was married with 4 kids) were getting ready to leave I hugged him, told him I loved him and asked if he was alright.  He hugged me back, looked me in the eye and said, “Are YOU alright?  It’s OK, everything is going to be OK”.  He was always looking out for me. Excuse me, I seem to have something in my eyes…BRB.

Here’s the thing.  It wasn’t just me.  Ask anyone who knew Uncle Jim and they’ll tell you he influenced them as well.  Both of my younger sisters feel the same way about him.  He has a reputation as a kind, loving, patient man.  He built that reputation over a lifetime of being…well, kind loving and patient.  His actual kids may feel differently, but frankly I doubt it.

The thing about this industry is that everyone, every actor, voice actor, stand up comic…EVERYONE starts out just like everyone else.  At the beginning.  Robert Di Niro didn’t BEGIN his career as an award-winning performer.  No one does.  Each and every one of us in this industry started out as a “younger kid” on set.  No matter where you are in your journey, there are those people who have a lot less, and a lot more, experience than you. 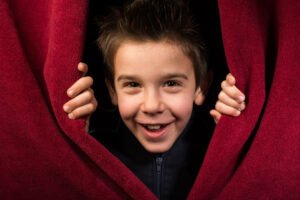 The notion that the industry is, as I have said before (more than once…here and here for example), built on relationships and you can probably guess where this is going.  More experienced actors should be cool to those with less experience, not look down on them as a nuisance.

A story from my experience

Many of you know that I am a relatively new performer.  I began my VO career at the beginning of the pandemic in 2020, and my screen acting career early in 2021 (January 2nd, 2021, to be exact).  My first gig was as a background actor on a limited television series, which BTW was very exciting for me.  At one point I was on set with a “name” actor.  Not a BIG name, but someone you are likely to recognize depending on what you watch on TV.  I was behind him at position 1, standing in a set that was a hallway in an office building.

Apparently, I was too close

I was standing about 3 feet behind this named actor waiting for the scene to begin when he turned and said sharply: “Back up”.  I backed up a couple feet.  “No, go around the corner!  I go on action”.  In other words, don’t come back around that corner till after I leave.  I was background.  The order goes something like this: Quiet on set, Roll sound, Roll cameras, Background…and…action.  If you can’t tell, background moves BEFORE the principal actors start.  I should have “gone” before him.  He was just being rude.  I honestly hope I never see that guy on set again, because I will forever have a negative opinion of him.  No, I won’t tell you who it was.

In a different scene, I got bumped to “featured” background where I was essentially set dressing for the principals who were acting in the scene.  There were 4 other “named” actors in the scene, and each of them introduced themselves to me and welcomed me to set.  One, another guy whose name you’d recognize, then made it a point to say hello and chat with me for a moment whenever we passed one another.  They made me feel welcome and part of the project, even though I was just a body taking up space for the sake of the scene.  It’s noteworthy that the first guy I mentioned was ALSO part of that scene and refused to speak with me.

It seems so small and inconsequential, but I’m sure it will stick with me for a long time.  One day I may work with that one guy again, and it’s gonna start off awkward for me.  He basically said, “Go away kid, ya bother me”.   I hope to work with the others some day! On the plus side it made me realize I never want to be “that” guy.

Remember where you began

When you are a famous actor and on set, try to remember where YOU started and instead of looking down on new actors, help to build them up.  Be cool to younger kids.