With this week’s topic “A handshake beats an autograph”.

Let’s talk a little bit about BOTH handshakes and autographs.  Where did they originate?  What is important about them?

Handshakes have been around for a very long time. They actually predate “recorded history”, so we could say that a handshake is prehistoric.   Although, to be fair the reason we know this is because there IS a history, captured in murals, drawings and carvings dating back as far as the 9th century BC, before written historical records mention them.  A handshake as a common greeting is believed to have begun only as late as the 1700s. 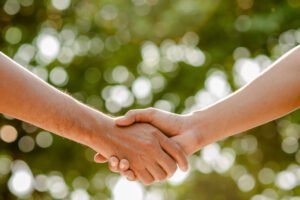 Today, at least in the United States (and other, but not ALL) countries a handshake is a common greeting between men and women, most often in business situations or when meeting someone for the first time.  Among close friends, a handshake can be congratulatory or a sign of good sportsmanship.  Different cultures both perform AND view handshakes differently, and some do not shake hands at all.  It is so common here in the USA that it is difficult to believe that a handshake in some cultures may be considered rude.

It is pretty commonly held that handshakes originated as a way to greet someone while showing that you were unarmed.  It’s pretty tough to shake hands when you are holding a sword after all (well, unless you’re a lefty!).  A typical handshake usually includes some amount of up and down motion of the hands which is believed to have begun as a way to “shake out” any knives that may be hidden up someone’s sleeve.  Trust issues, maybe?

With the onset of a global pandemic, handshakes are beginning to go by the wayside in favor of fist and elbow bumps.  Skin to skin contact as in a handshake is known to transmit many germs and microbes so perhaps it’s a good idea to avoid them, at least for the time being.

Did you know that A.) in some cultures raising the hand being shaken to the nose and taking a sniff is part of the routine?  And B.) this practice seems to transfer chemical signals between handshakers in a process known as “chemosignaling”?   It is believed to serve as an evolutionary method to learn about the person whose hand is being shaken…similar to the way animals sniff one another.  Ewwwww…OK, not for me!

Like handshakes, autographs have been around for a very long time, longer than handshakes even!    We all know that an autograph (as we know it today, anyway) is the signature of some famous (or infamous?) person that is kept as a collectable or heirloom. 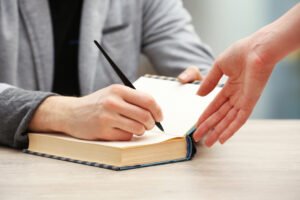 The earliest recorded autographs are actually not autographs at all as we know them today but instead a signet ring used to seal documents in wax or clay and validate their authenticity.  Each person (or family) had a unique design specific to them.  The rings were common before the majority of humans knew how to write, and they were NOT just for kings and nobleman.  There are definitely artifacts found with a farmers seal, or some other laborer.

Autograph nearly literally just means signature or seal.  Over time as people became more able to write on their own, they began to not only seal documents, but sign and date them (all the way back to the Greeks and Romans).  Today we separate the word signature from autograph, but the word autograph literally means: signature.  From the Greek: “autographon, neuter of autographos “written with one’s own hand,” from autos “self”…+ graphein “to write”.  Autogrtaph=self written.

Autograph collectors have been around for a long time as well.  There is evidence that as early as 900 BC a Roman dictators son-in-law kept a display case of signet rings.  In my mind the rings could be USED to create an autograph, or possibly to forge documents?  I don’t know, but for sure autograph collecting has been going on for a long time.

Why is a handshake better?

Good question.  It seems, on the surface, that an autograph would be better than a handshake, since it can be kept and displayed for a long time.  And there IS something to that, I suppose.  Many people collect autographs of famous people just to prove that they’ve met them and then drag them out as bragging rights to their friends.

But here’s the thing…

An autograph is impersonal.  Ever waited in line for your favorite celebrity, author, or sports figure to get that elusive autograph?  Notice that your interaction with that person was JUST about as long as it took them to ask your name and then sign whatever it is you have for them.  Notice that EVERYONE’S autograph says the same thing, nearly word for word? And if they DID shake your hand, it was distracted and perfunctory (I always wanted to write that word in a blog post, you’re welcome).  They’re distracted and doing this as a marketing gimmick.  They would rather be anywhere else.

Ever run into a celebrity in an everyday situation and had the chance to say hello?  Yeah, I know, many celebrities want to remain invisible, and probably rightfully so…but, I have had the chance to be around a celebrity or two “in the wild”, and let me let you in on a little secret:  They are people.  I’ve greeted and shaken the hands of more than one “celebrity” (of varying levels) and been able to just chat with them (albeit briefly).

In meeting these people, the actual interaction, that begins with a handshake, was more pleasurable and more valuable than a signature on a piece of paper.  I would trade a dozen autographs for one genuine human interaction.

As a VO artist and an Actor, you MAY someday BE a celebrity.  I mean, maybe (probably) not like Jack Nicholson or Michael Keaton… but recognizable by SOMEONE.  Ask yourself: What would you look forward to more, talking to someone like a person or signing some piece of paper?  I know the answer for me, you have to ask for yourself.

For me, the genuine human interaction would be far more valuable thank ink on an object.  My dream is to play a round of golf with Samuel L. Jackson (did you know he was an avid golfer?), or to have a creative conversation with Martin Scorsese, or having a laugh and a beer with Jimmy Buffet.  THAT kind of memory, and potential friendship, in my mind is worth far more than asking for a signature.

A handshake, and the conversation that follows it (even if it is very brief), is far more valuable than a quick scrawl on some piece of memorabilia would ever be.  It’s far more personal and intimate.  And if you need to have that object to prove to your friends you met this person…maybe you need new friends.